May and Yam is a game I created in 1993 for the Amiga 500. It was never released anywhere, and I distributed it for free at computer parties. It was a homage to the game Pang!, which I loved around that time. Obviously, I couldn't reproduce the original, and I made many simplifications, such as substituting the rope by a tennis ball (not sure why I picked a tennis ball...) I didn't have enough time or skills to make everything by myself, so I even ended up ripping some music from other games, and art from here and there. So it's a bit of a collage. Here are some screenshots of the original game, 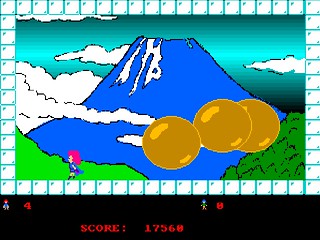 A couple of years later I released May and Yam 2. This time I avoided ripping stuff and drew all the stuff by myself. This game is no longer related to Pang! It's just a single-screen platformer where you need to collect items, while avoiding monsters, to progress. Some screenshots here, 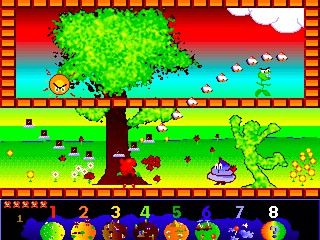 Both games can be downloaded for free. You will need an Amiga computer or an emulator in order to play them: Surprisingly, someone has made longplay videos of the games. If you are curious but don't have an Amiga, here they are, As the person making the longplays found out, May and Yam 2 has a bug and the game ends abruptly before the last stage. I'm sure I made a version that worked, but unfortunately I can't find the disk with the working version. I could fix the code, but I think I'm missing some assets for the ending as well... If you want to take a look at the original source code, it's open-sourced here,